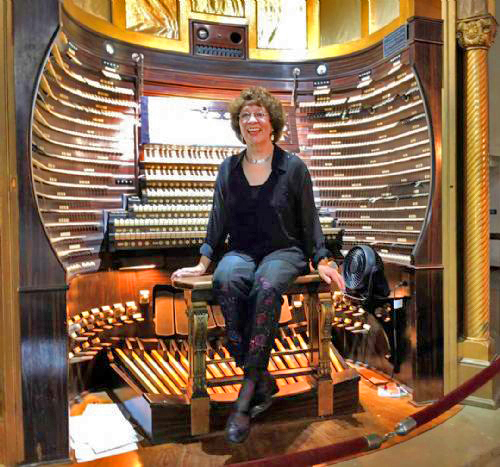 Evelyn Larter is a widely published composer based in the South Jersey/Philadelphia area. She offers numerous professional music services to individuals, churches, and organizations. Her most recent commissions include an anthem for the Opening Convocation of the 2019 Mid-Atlantic Regional Convention of The American Guild of Organists, and a collection of six Easter vocal solos for Augsburg Fortress Publications, just released in April, 2021.

Evelyn Larter was born in Glasgow, Scotland, and is an honors graduate of the Royal Scottish Academy of Music. She won the prestigious Governor’s Recital Prize for piano, and graduated with honors in concert piano and music education. She performed with the Highlands Sinfonia, and on Scottish television. Since moving to the United States with her husband and family in 1988, Evelyn has been active in the Philadelphia area, collaborating with many well-known soloists and ensembles. She was on the music staff of historic Tenth Presbyterian Church for 11 years, regularly substituting on the organ.

In September 2003, Evelyn became Director of Music at Deerfield Presbyterian Church, South Jersey, where she organizes regular recitals with world class musicians. As a composer, Evelyn writes anthems for her small church choir, and hymn arrangements for instrumental and vocal solo, and for small ensembles.  She is published by the Lorenz Corporation, Saint James Music Press, Abingdon Press, Augsburg Fortress Publications and Sheet Music Press at Sheet Music Plus.com. In 2019 her collection of hymn arrangements for piano trio, How Sweet The Sound, was named a runner up in the Sheet Music Press annual competition to find the best new music published on the website.

Evelyn is an active member of the SouthWest Jersey Chapter of the American Guild of Organists, having twice served as Dean. In 2012 she was successful in the examination to become a Colleague of the American Guild of Organists (CAGO). She served as Convention Coordinator for the 2019 Mid-Atlantic Regional Convention, AGO, where she was also a commissioned composer. She has given several recitals on the world’s largest organ, at Boardwalk Hall in Atlantic City, NJ.

December 2011 saw the release of her first CD recording, a collaboration with flutist Daniel Sharp titled Amid the Winter’s Snow. In 2015 Evelyn fulfilled a commission from Lydia Calhoun, clarinet, to create many new international Christmas carol arrangements for her CD project entitled Carols for the King from Around the World, which she also recorded and premiered with Lydia.

Evelyn enjoys all kinds of music, and taught many gifted students. She served many years on the faculty of the Csehy Summer School of Music in Langhorne, PA teaching piano, organ and composition.  She is married to Rev Dr Ken Larter, the minister of Deerfield Presbyterian Church. They have four adult children, and five grandchildren.